Standing On The Edge Of Tomorrow

History seems poised on the brink. I hope it will come through unscathed. America just impeached the most corrupt president backed by the most corrupt government in its short history. England just voted its own Trump, Boris Johnson, in as its Prime Minister. Scotland said, "Thanks, all the same," and is standing up for its Claim of Right that sets sovereignty with the Scottish people, not with any government, English or Scottish, monarch or otherwise.
Scotland was way ahead of the democracy game, even in the fourteenth century.
When Sir William Wallace was asked in the midst of a protracted execution to swear allegiance to his king, he answered that this King Edward, was in fact no king in Scotland. Twenty years later, after continuing efforts by the English to subsume Scotland under its aegis, a group of Scottish lords sent the Declaration of Arbroath to the Pope, as a reminder that the country of Scotland was indeed sovereign and not ever to be regarded as part of the Kingdom of England. 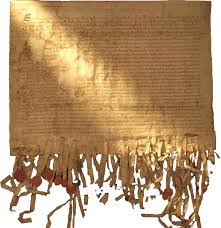 If you take all the arguments proffered by Westminster before Scotland's 2014 Referendum as to why Scotland should not regain its independence, there you have a profile of the pressure that was exerted back at the beginning of the 18th C for Scotland to give up its independence in the first place.

Three hundred years later, Scotland is now in the odd position of having to "ask" Westminster for "permission" to hold another referendum, and the same old arguments are being wheeled out. Last time, they targeted the old folk, those who have been especially well-trained in the doffing of caps. Breaking  the traditional norm of Purdah, prime minister David Cameron rode post haste to Edinburgh and offered all manner of baubles if only Scotland would not take itself to itself, as any country, of course, has a perfect right to do. 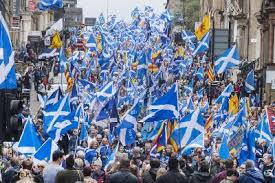 This time, history is not on the side of the usurpers. In this case, the young people are wiser than the old. Some of them have even been educated in Scottish history. We have to thank the Hollywood machine for helping us out there. But increasingly it is so in Scotland that while you can fool some of the people some of the time, we're not going to fall for these lies any longer.
On the brink of 2020, seven hundred years to the year after that ancient and stamped Declaration of Independence was sent to the Pope, my country stands to become truly, though not for the first time, the land of the people, the land of the free.

Posted by Claire McDougall at 8:44 AM No comments: