The last time I was in New York City, a blanketing snowstorm stopped all incoming traffic, including snow plows, and you could walk right up the middle of the street with no fear of being run over. New York City for one day fell silent. But it is the height of summer now and about 100 degrees (200 degrees if you venture down into New York's bowels to take the subway.) 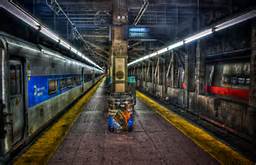 I am staying in someone else's apartment with only the brick walls of other apartment buildings out every window. Across the fire-escape and down to my left, a fat half-naked man sits at a table, through the window of an apartment higher up, kitchen utensils, wooden spoons and spatulas, stand up in a pot. No birds in this land of brick walls, nothing living in this apartment, but an ant that wanders around the bathroom, and in the middle of one night on my leg. Tiny Ant cheers me up, though clearly his days must be numbered. A sign down in the lobby tells me to expect the exterminator, and my midnight friend will not escape that. 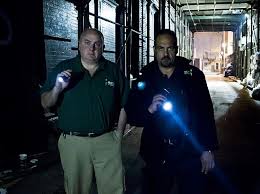 I find it hard not gawk in New York City. Being a writer, I naturally create worlds around the characters I encounter: the sleeping black giant on the subway who takes up two seats, the affectionate Asian couple as skinny as rails, the woman who all day folds other people's clothes in the heat of the laundromat.
People here seem so strange next to their Aspen counterparts. They have no back yards, no views, no money; they live on the brink. Hardly anyone speaks English, and I wonder if they, like me, left their hearts in their homeland. I step gingerly along the pavement to avoid old gum pressed into black splats and gobs coughed up by old men sitting on chairs outside their hole-in-the-wall businesses. Men in hard hats spread tar on the road from a truck that reads "God Answers Prayer" on the side, even though it seems He hasn't answered any of their's. Water spurts out of fiberglass flowers onto filthy playgrounds. An old guy sits outside on a chair in a T-shirt that reads Wink If You Want Me, scratching away at a lotto ticket. If only the Lotto answered prayers.
And then the sirens, the sirens, the sirens. Every minute a person gets rushed to hospital in New York CIty; every minute a flashing police car elbows its way up a choked intersection. 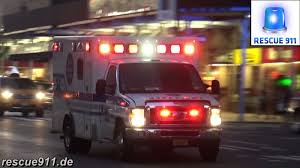 I think too often Thoreau prattled on pretentiously about the healing qualities of nature, but after even one day in New York it is into flights of his kind of fantasy that I fly. I think of woods and colourful birds as I sway around the next subterranean bend on the Q train or the 1,2,3, train, snaking in the devilish dark to places I don't want to visit and will try in my dreams to forget.

Posted by Claire McDougall at 10:16 PM No comments:

The Long And Winding Road

Because my local school in Scotland stopped short of the final two years of high school, I had to live and study thirty miles from home in the largest town in the area, Oban. The bus that took us country bumpkins into the metropolis had a tape player but a very few tapes. One of these was by Paul McCartney, and often the song, "The Long and Winding Road," would be playing as we went home on a Friday evening along a long and very winding road. (McCartney actually owned a farm not that far away, so it may indeed have been this very road he was thinking of!)

I am on a road trip to New York City right now along a different winding road. If you Google, "Things to see along Interstate 80" the general consensus is Nothing. 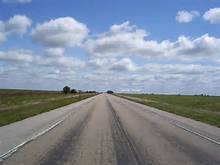 If I were on another highway,  I could be enticed by signs for retail ventures such as Wall Drug, or  South Of The Border, one sign just about every mile for hundreds of miles, bewitching you into thinking you really ought to get off this long road and pay the place a visit. Of course, feeling somewhat cheapened, that's exactly what you do.

I would stop at Indian remains, but they have been co-opted into memorials to the glory of the pioneers. I went to one in Utah run by little old white ladies in which were posted glowing testimonials from Native Americans who had been removed as children to government boarding schools and there given Christian names like Earl in place of their lovely Running-Water type names. Reading these endorsements was like watching a promotional video for Isis with a Western hostage at knife-point calling out Allahu Akba!
Along the mid-section of this road, there's plenty of shrines to white Americans and the forts that kept them safe and sanctified. I stopped at one to Buffalo Bill whose claim to fame was having slaughtered almost five thousand buffalo in eight months (hence the name.) Thanks, Bill.
So, pedal to the metal, eyes to the front, mile after mile, state after state, as in life, so on the road, the trick is to keep on trucking.
Posted by Claire McDougall at 7:15 AM No comments:

I got into some really interesting research this week for the last in my Veil Of Time series, because I have been imagining what the USA would look like if the pale invaders had never come and instead stayed in Spain and England or any of those empire builders.

According to the few Native Americans that are left (a staggering 1% of the original population) the effect of the pale invasion was to break the Sacred Hoop, a metaphor for the life of man, beasts, nature, all in balance. A circle happens when outer and inner forces are held in perfect balance. When you look at the world the white man has forged, you have to conclude it is wildly out of balance. You have all the outer force pushing down and nothing inward to resist, which is why we live in the days of the imminent implosion. 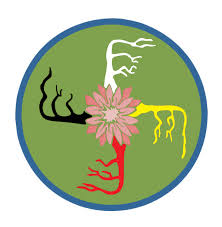 Here's a fact: until the Romans came, native British houses were round. In my book series, dealing with both an historical Scottish past and a projected alternate future, all the houses are round. Think, Tipi. 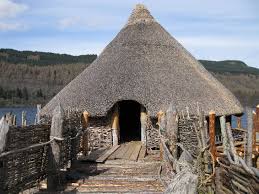 In Scotland, the church is called the Kirk, which means circle, because the Christians would chase out the pagans and build their own churches within old pagan circles. It was a mark of a psychological shift that the monks brought in rectangular meeting houses. The circle that you see in Celtic Crosses: 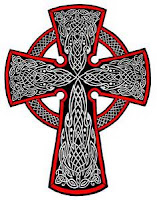 ..is actually a pagan symbol of wholeness trying to break back in. The circle is one of those archetypes in thought that Jung liked to paint on the inner walls of his circular tower. Native Americans used to say that everything is trying to become round (and they didn't even know that those tiny sparks of light in the night sky were actually spherical planets and stars.) Nature is round and man is square, so goes the idiom.  It is worth noting that woman, the curvy one, is less so.
May the circle be unbroken...because it is in the round that we are at our most whole.


Posted by Claire McDougall at 9:37 AM No comments:

Years and years ago, when I was new to the United States, an unhinged American politician assembled a news conference, took out a gun and threatened to shoot himself. I am sure I'm not the only one who remembers the chaotic scene on TV as he tried to warn others to stay back and then did himself in.  Some remarkably insensitive cameraman followed him all the way down to the floor and kept filming as blood poured out of his nose.
It is the same kind of derangement I see every time Trump the Drumpf takes to the podium. Eminent journalists are beginning to question his sanity. I think, any more republicans opting to vote for Hillary, and he might just out of spite jump off the very deep end like the politician in the nightmare TV clip.
But this blog isn't going to be about the monstrosity that is Donald Trump's bid for public office. I can barely stand to listen to another word he utters, because I think those journalists are actually right.
The Brits have an apt, if not too benign, word to describe what he is: Doolally. 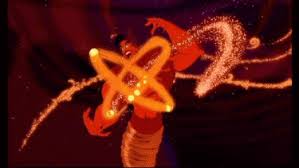 So I'll talk about sex in literature instead. Bury my head in the sand. Why not, it's what the Republican establishment is doing.

I was once told by some ill-advised editor of my first book (yet to be published) that there wasn't enough sex in it. And, fool that I was, I went through and added about fifty percent more. Why did I do that? I deeply regret it, and it is on my to-do list to go back through and take fifty percent out.
Sex is a bit like chocolate - you can get too much, and after a while it definitely loses something.  I feel this when I read Gabaldon's Outlander. Yeah, we get that Claire and Jamie are wildly attracted to each other, but their little disappearances to have it off behind a vase of dried flowers quickly starts making me want to castrate somebody. It happens with such repetitive boredom that it can't possibly do what good sex in a novel should do, what every component of a novel should do, which is deepen the story.

The question in literature as in life is always balance: how far you should go. I get less and less comfortable with detailed sex scenes. They so quickly fall into clichee. 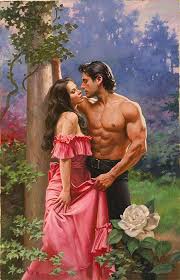 All these examples are from celebrated authors:

1) "...and she lifted herself from his face and whipped the pillow away and he gasped and glugged at the air...she scratched his back deeply with the nails of both hands and he shot three more times in thick stripes on her chest. Like Zorro."

2) "She turned head to foot, and put her most unmentionable part down on his hard-breathing nose and mouth, and took his old battering ram into her lips."

3) They rolled together into one giggling snowball of full-figured copulation, screaming and shouting as they playfully bit and pulled at each other in a dangerous and clamorous rollercoaster coil of sexually violent rotation...Ezra's howling mouth and the pained frenzy of his bulbous salutation extenuating his excitement as it smacked its way into every muscle of her body."


Posted by Claire McDougall at 9:59 AM No comments: