Yesterday, this United Kingdom of reluctant countries voted to leave the European Union. Well, empires rise and this is how they fall - in a flurry of confusion. England voted to be an island, figurative as well as physical, and an island it will now be, little England without Scotland, and eventually without Northern Ireland and without Wales, too. 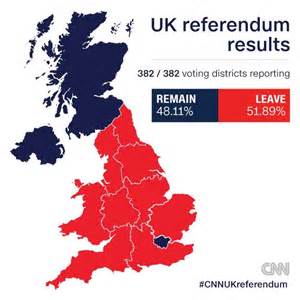 That line between the blue and the red is the Scottish border. Two different countries, two sets of law, two very different sensibilities. Within the two years it takes for England to pull out of the European Union, I predict a second Scottish independence referendum will join Scotland to Europe and away from the British Empire. With it will go Scotland's oil, its renewable energy industry, its whisky and tourist industries. All of these will cut severely into English revenues, for although Scots represent only 8.4% of the UK's population, it generates 9.4% of its annual revenues. This figure, long suppressed by the English government, has now been released and puts paid to the myth promulgated  by said government that England subsidises Scotland and keeps it from sinking into financial chaos. Now it's clear the reality is the other way around. Only, myths die hard, and voters in England weren't thinking about that when they voted yesterday to cut themselves off from Europe.

Empires never exist honestly. They rely on the spread of misinformation. In fact, they take an active role in keeping a lid on the truth.

An astute journalist in the New York Times earlier this week suggested that it is not Brussels Britain needs to free itself from but London.  It's the controlling megabuck moguls like Rupert Murdoch that we need to free ourselves from and the English old boys' club to which Boris Johnson and David Cameron belong.  This is a fight, at last, for the freedom of the ordinary people. The Demos in democracy.
So now that the people are up and running, certain things need to be put in place to keep them going:
A free press - when was there last one of those?  Free broadcasting - that used to mean the BBC, but now - don't make me laugh! Everything has been sliding for a long time into oligarchy, just as it has in America.  It's the oligarchs, enemies of democracy, that need to go. David Cameron's is the first head to roll. If the English elect Boris Johnson to fill his shoes, his head will be the next.
And in a democracy, you need free publishing houses. I was talking to a publisher in Scotland who told me that it is hard to get any Scottish book into Scottish bookstores, whether published in Scotland or elsewhere.  I know I have had that difficulty. Most of the respected publishing in Britain goes on in where? Why, London, of course. 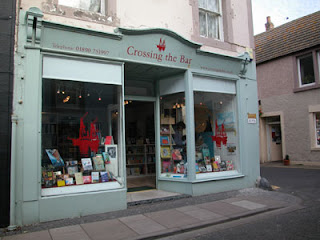 It was in just such a vacuum in Ireland right before that country became independent that Yeats formed the Irish Literary Society. Because empires control, just like the father of a dysfunctional family who is himself sick, but wants to make sure no one knows . So the empire takes charge and brings the literary presses under its control. London control.
The people of England need to wise up and recognise that it's these conservative governments they keep electing that are at fault for their dire straits. Not the immigrants, not even the European Union. The sickness is in their own house, and it is time to pull out the divorce papers.
Posted by Claire McDougall at 8:51 AM 1 comment:

If you google Communism you will find it described thus: "A political theory advocating class war."
But, while Maher's joke might be spot on, google's definition is not. Karl Marx's political theories were not advocating anything. They were descriptive not normative. For class war, history needed Lenin and Stalin.

And yet in 2016, America still reacts out of fear whenever Communism or its cousin Socialism gets mentioned.  After all, it has a long history with this knee-jerk reaction. Take Macarthyism, one of history's greatest ironies, which led to just as restrictive a government as the regime it feared.  Not so long ago int his country, school children were hiding under their desks for fear of the "Red Scare." 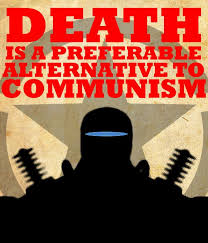 All of which makes the rise of Bernie Sanders even more fantastical. He isn't even a Democrat, but more of a dreaded socialist. If this had not been America, I would have put my effort behind this man's campaign. But this is America, and although it did elect a black man for president, it really didn't like it - only now that he is on his way out are his favourability ratings reflecting the admirable job he has done.  America is further away from voting for an out-and-out socialist than it is from voting for a person of ethnicity or a woman. The fact that a mogul like Donald Trump could rise to prominence is powerful proof of that fact. It is also proof that Americans are motivated, not by the cool light of reason, but by fear.
I have friends who are toying with voting for Trump in order to speed on the inevitable collapse of the old boys' political paradigm. But that would be to make the same mistake the post-Marx communists made. Lets's just watch this unfold in its own time. It will happen. But voting for a patent idiot like Trump will only cause more bloodshed as the ship sinks. 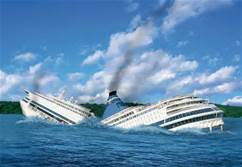 That smoke you see is Donald Trump's rhetoric. The last cry of the dinosaur, as Michael Moore puts it.
If Marx was right, then one day the president of this country will be a socialist. History seems to have picked up speed, and who knows it might happen in my lifetime. But effectivelyAmerican Zeitgeist is about a hundred years behind the rest of the developed world. It is running around trying to police the world as though empires were still up for grabs. It is an adolescent country trying to grow up on a world stage. Rather like Justin Bieber.


Posted by Claire McDougall at 10:11 AM No comments:

What on earth are some democrats thinking when they say Hillary Clinton wouldn't be any better than Donald Trump? This vitriol is so extreme, I can't help feeling that if I dug around a little in the dark place from which this is coming, I would find some other prejudice lurking, and it might just have to do with the fact that she is a middle-aged woman. There is a bandwagon passing here that I think more than a few Democrats and liberals are jumping onto.  But the truth is, there isn't any considerable difference between Hillary's policies and Obama's. So what is going on here? Could it be that the American people don't want, as Rush Limbaugh said, "to observe the aging of this woman?" Would she be more endearing if she looked like Sarah Palin? Because in this land of the free, aren't women supposed to be attractive all the time? It's clear that the film industry thinks so. 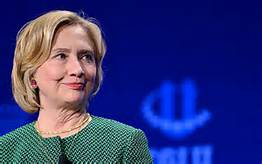 She has wrinkles; she is old, off the sexual radar. How dare she? I have to say I like Bernie Sanders, but imagine if his hunched, white-haired, female counterpart were running. It's no accident Hillary has to dye her hair and look as young as she possibly can. I can't wait to see her and Trump go toe-to- toe in a debate. She will be able to show that she is a very competent candidate, aged womanhood notwithstanding. And I am glad she looks nothing like Palin.

As for the Conservative side. Here's your bed. You made it. Now lie down with those prickly right wing Christians, and let me tell you, they won't serve you between the sheets the way Hollywood says they should. But it was you that let them tuck in the corners; you let them seduce you into the bedroom. You let them help you forget the inconvenient truth, many inconvenient truths, but particularly the one that was written into your very constitution, that religion and politics should stay on their own sides of the house, and never, never, share a bed. 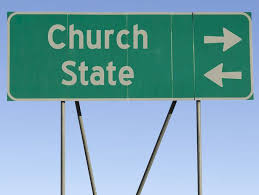 It's not just that religion has become the Conservative bedfellow, but the kind of religious zealotry that operates within its own little bubble. What Jon Stewart calls "Bullshit Mountain." Conservatism in America has a dysfunctional relationship to the truth. And now it's beginning to show.
The Grand Old Party needs to get out of bed and put on a whole new face, one that doesn't look like Mitch McConnell, and especially not like Donald Trump.  "Crooked Hillary," he says? Talk about the pot calling the kettle black! The world has moved on, and the old boy network isn't going to work anymore. I think this is what this election is about as much as anything.
Hillary Clinton is not going to make any radical changes, and realistically neither would Bernie when up against obstructionist politics on the Hill. But at least she acts like a grown-up and engages her intellect. At least she isn't in the midst of a perpetual, shit-flinging, hissy fit.
Posted by Claire McDougall at 9:01 AM 1 comment:

John Steinbeck was an arsonist. At least, he shouldn't have set fire to what was supposed to be his Nachlass (German for what was left behind - or should have been.) To the lament of his future fans, like myself, he was always taking old work, early drafts and abandoned projects to a fire outside his house and destroying the evidence. We are so much the poorer for this insecurity of his. So much was lost.
And yet with this same goal in mind, I was recently going through twenty-five years of yellowed papers on my shelf to see what I could jettison. Some of this fusty material, I couldn't even remember having written - what was laid down in blood at the time has now discoloured and turned itself to dusty death. Much of it was read to a writer's group I attended for about a decade, and other people's comments still ring harsh, with much more force than the compliments. I want to build that fire up and throw all of this detritus  on its funeral pyre. 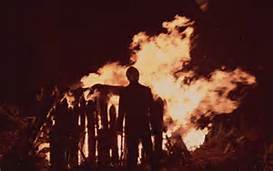 It is with some sense of repulsion that a writer (or maybe not all writers, just this one) flips through old sentences, old sentiments, old sermons. The impulse is to toss all of it. After all, I am so much more refined these days, my craft so much better honed, the things that move me so much more urgent. True? I hope so, true. I cringe at my former self. I cringe at my former commentators.
The impulse to wipe the board clean, to erase our footprints in the snow, is probably not a noble one. What future reader wouldn't take the opportunity to compare a very first draft of Of Mice and Men with the published version. Maybe it was better. Sometimes good raw material gets lost through the demands of the publishing process. 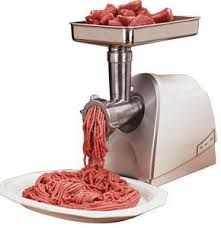 So, my dusty drafts and abandoned notions get a stay in their execution. I will simply pile more papers on top of them.  There they are and there they'll stay, says the witch. Until the next bend in the Yellow Brick Road. Until next time.

Posted by Claire McDougall at 8:51 AM No comments: