My father was a minister, and at every Sunday service he would give a children's address. One of his favourite pictures to paint on young minds was the image of the thermostat. He meant it in purely Christian terms, of course, but his point was that while the thermometer registers the change in temperature, the thermostat actually controls it. So, being a thermostat was an ideal I grew up with. I abandoned Christian ideology long ago, but the image applies just as well to the arts.
My brother-in-law, sculptor Malcolm Robertson, has just been commissioned to create a monument to one of Scotland's more successful attempts to wriggle out from under British rule: the Battle of Stirling Bridge. Fans of the film Braveheart will remember this as when William Wallace and his outnumbered rabble army forced the well equipped English into a corner and won the day.   Things are starting to change in Scotland, and, whether the politicians realise it or not, the artists should be at the forefront. The large metal sculpture depicts Wallace and his ally Andrew De Moray holding the Scottish flag up high. It's a mark of defiance - art can do that, even when it doesn't mean to - and no wonder the ruling class has discouraged it up until now. 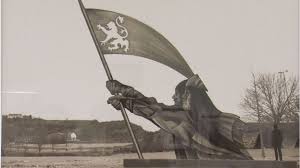 Pictures are powerful tools because they almost bypass the intellect and work directly on emotion. If you watch the BBC news and hang on until they show the British weather forecast, you might be surprised to see a map that reduces the size of Scotland by close to a half. If you have been watching that all your life, it's no wonder you might be rather timid when it comes to proposing monument's to your country's history. 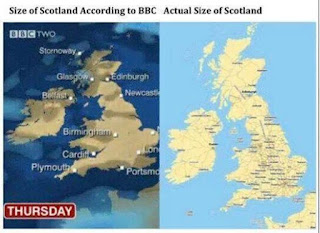 This week I read a few Yeats' poems at a St. Patrick Day's gathering. Yeats was not a radical politician but he was an artist at a time when the tide in Ireland was turning. History thrust him into the path of that struggle by simply being true to his craft. This is the joy and the gravitas of working the arts. They are in any case a thermometer. But in times like these, they can turn the tide and re-set the weather map.

Posted by Claire McDougall at 6:24 AM 2 comments:

I am drawing close to finishing my third book in The Veil Of Time series.  I hope it will be the last book -  some series keep on going long after they should. I never dreamed I would have followed the first book with a second, and now a third - but then I found I had more to say. Because there is far more to this series than a simple love story between modern day Maggie and 8th Century Fergus. Much more than I had even envisioned when I set out on this quest. My initial impulse was simply to set a story at Dunadd in Argyll, Scotland. Why not, I had stories in every other corner of that gorgeous countryside where I grew up roaming the hills like some heroin in a Bronte novel. 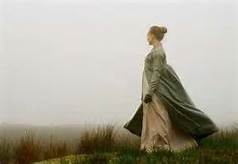 But the more I pondered the time-setting of this novel, the more I realised that I was dealing with a watershed moment in the history of Scotland: the crucial advance of a religion that bore its creed within the structure of the Roman empire. The "Christians Soldiers Marching out to War" were out to conquer those "others." And once you have divided the world into "Us" and "Them," sanctified and heathen, no holds are barred, especially if you have papal bulls sanctioning your "Doctrine of Discovery." 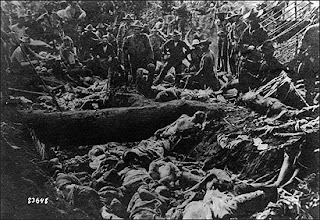 (And if you think this dirty side of the American experiment is consigned to the past, just listen to the rhetoric of Donald Trump.)

So, I began to ask myself what would have happened if the "heathen" in Scotland had not been "reformed" but had pushed the invading religion out? What if Scotland's native pagan religion had not been expunged but had evolved and advanced into the future? For one, that scandalous heathen practice of honouring the earth would not have been overridden; that tendency for the males of the species to form hierarchies and subjugate everything beneath them, including the entire female population, would have been held in check. The bloody Crusades in the Middle East, the Highland Clearances in Scotland and the American genocide portrayed in the picture above would have existed only in the worst nightmare, and only if that dreamer was particularly sick.

What I have left to write in the final chapters of this third book (aptly titled "Dark Matter," if I do say so myself!) is the final battle scene. Spoiler Alert: the pagans are going to win. And if they had, what would our present look like? This is the question I am toying with in this final book.  Keep your eyes on the shelves: I hope you'll get to read it.


Posted by Claire McDougall at 8:32 AM 2 comments:

Once in a while, you receive a piece of fan mail that makes your day. Makes your week or month. I got one of those endorsements a couple of days ago, a very welcome cheer from the wings.  "I'd forgotten what a good book is," it said. It made me smile, I cannot deny it; it lent a buoyancy to my step.

Being in publishing limbo right now, it can be easy to follow the path down to glum meadow.

"It's snowing still," said Eeyore gloomily.
"So it is."
"And freezing."
"Is it?"
"Yes," said Eeyore. "However," he said, brightening up a little, "we haven't had an earthquake lately." 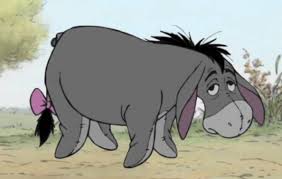 And then some kind soul tells you how great your book is, how they can't wait to read your next one, and, as Piglet says, "Suddenly it's a much better day." 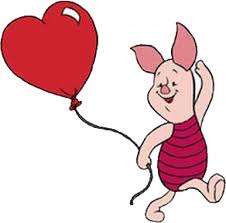 Mark Twain once received a fan letter that began: "Writing this letter is one of the pleasantest duties I have to perform before leaving for 'Hell or Hadleyburg' - which the doctor tells me must be soon now."
It's a comment worthy of Twain himself, but I'd guess he didn't know what to make of it.

I know a writer shouldn't depend on praise, but it would be dishonest to say it doesn't help. We're only human after all. Once you get over it, you'll be trudging through the mud again, brooding on the face of the uncreated flux, as a bird on a dark sea. (Lawrence)
Maybe Lawrence was suffering from a case of Eoyore-itis. and a kind word from a fan might have brought him out of it. Or maybe he was just being what the writer tends to be, one of God's more broody and insecure creatures.

Posted by Claire McDougall at 8:04 AM No comments:

Let's Call The Whole Thing Off

As I was young and easy under the apple boughs, I was granted a place on a summer exchange program from Edinburgh University to Dartmouth College. I think the film "Animal House" was based on life at Dartmouth in New Hampshire, though it is not atypical of Ivy League colleges, and I inevitably ended up at one point in a fraternity - a new concept in itself for me - where a group of frat boys gathered round to hear my "funny" English.
"Say something," they goaded.
"I don't know, how about the rain in Spain," upon which they fell about in hysterics (the green Frat juice being passed about might have had something to do with it, too!) But it was my introduction to the phenomenon George Bernard Shaw described as "Two countries separated by the same language."
"Or what Dylan Thomas called, "Two nations divided by a common language." 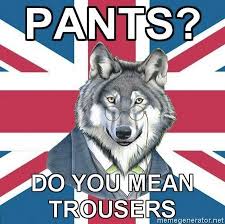 ,
Acknowledging creator of this poster

When I was working through my book with my editor at Simon&Schuster, most of what I had to correct was my British English. And I have to say it grated on me. I kept feeling something like, "Look, we invented the bleeding language!"  Just like I resist American citizenship and cling to my green card, I refuse to adapt to the English spoken in my adopted country.
So, although you say tomaydas, I will always say tomahtoes, thank you very much.


I have to admit there are certain things I have had to change: for instance, nappies to diapers, but only because it is too unproductive in the supermarket to ask for  "bin liners," etc. Say, what? Trash bags, then.
And then by necessity, you can't help but go with the flow when it comes to rubbers. No, not those - I mean erasers. I suppose I should follow the Trump mandate and just go home. To which I say, "Chance, old pal, would be a fine thing."


Posted by Claire McDougall at 9:47 AM No comments: