Stepping Out Of the Box

These are Neanderthals, according to the most recent study on what that species might have looked like. 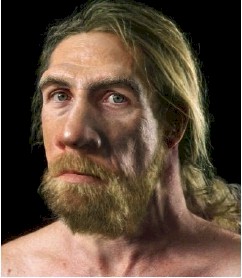 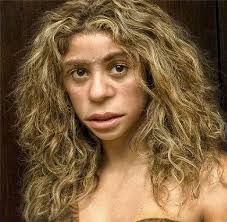 But wait a minute! Neanderthals are the hairy dense knuckle-draggers we were taught about in school, the ones that became extinct because they couldn't keep up with the superior brain of our Homo Sapiens ancestors!
Such is the history that is taught, but this should never have been the conclusion, because any comparison of a human brain with these ancestors of ours (yes, we did interbreed) reveals that they had larger craniums to hold larger brains. Recent DNA sequencing has shown that Neanderthals were likely fair of skin and red of hair. In fact, the percentage of Neanderthal DNA you possess is roughly proportionate to how northern European you look. Put that in your superior pipe and smoke it! In fact, perhaps the only reason Neanderthals ever went extinct had to do with the superior violence of this new upstart race called Sapiens. The trickster.
Because Homo Sapiens had another trick up its sleeve, something called denial.  It's a psychological flaw really, a need by the human mind to bend reality to its own cause.
Here's another trick: The Dark Ages. 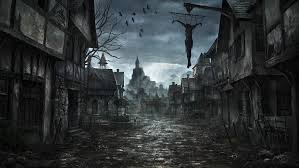 Historian Frances Pryor says "Poppycock!" There was never anything of the sort! Archeology shows continuous human development thoughout the ages, with stagnation nowhere in sight. But then, if you want to praise the "Enlightenment," you have to concoct something dark from which it emerged, don't you? If you want to have a renaissance, something had to have died on the limb in order for it to be reborn. As if pagans weren't capable  of  a flourishing of the arts. Dark Ages, dark pagans, dark neanderthal versions of Homo with heavy eyebrow ridges and only half a clue. 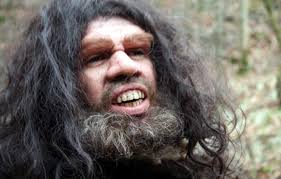 It's hard for a species that regards itself with such superiority to watch its paradigms teeter and topple. I am far from guiltless in this: I am sticking with my paleolithic flip phone, my computer that still accepts floppy discs, and I will have nothing to do with Facebook. Paradigm shifts just run against the grain. Gallileo, Copernicus and Einstein were all persecuted for thinking outside the box of scientific status quo. Modern man isn't about to welcome the blood of his Neanderthal ancestors in his veins. He may be inventive, but he doesn't like any rocking of the boat he's trying to sail in. For this he might himself go extinct. Homo Ignoramus.


Posted by Claire McDougall at 8:43 AM No comments:

The Mayan calendar says that once this era runs into its end times, things are going to start moving much, much faster. When I got my first computer back in 1984, it was a portable (ha!) Kaypro, basically a word processor with some games, like "the psychiatrist game," where you actually had a conversation with a machine! No you didn't - the computer just stored some of your answers for a minute or two and then looped them back to remind you that this is what you believed. Astounding! 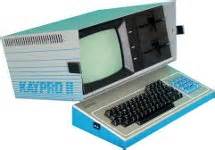 Back in 1997 or so when I first saw moving pictures on a computer screen, I couldn't wrap my mind around it. Zoom forward to 2017, and we have computers with a terabyte memory, smart phones, smart houses, smart grocery stores.  My Kaypro days belong in a cave in the dark ages. 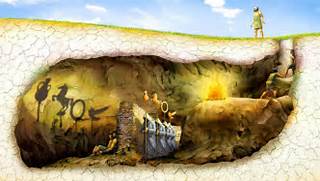 And yet, in terms of world politics, you might be persuaded that the Mayans had it all wrong, and rather than moving forward, we're actually slipping backwards. It seems like we have left democracy behind and are going the well worn route of dictatorial governments. Rather than moving forwards, we seem to be in the midst of an explosion of male hierarchical power with Donald Trump on the top of this dung heap.
But perhaps through all the gyres of history we are actually now at a tipping point. On a global timeline, things look much more hopeful: since the year 1820, extreme poverty has dropped from 95% to 10%, child mortality from 45% to 4%, fewer people are dying from war than ever before and life expectancy has doubled. Even 9% of diehard Trump voters are already leaning away, are rubbing their eyes and wondering what kind of a nightmare they have woken up from. 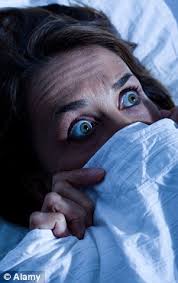 So perhaps the Mayans were right, and the age in which we live is going into warp speed. Donald Trump, Duterte, Erdogan, Vladimir Putin, all the dictators and middle men of the world, are quickly moving into history like stations from a fast-moving train. Computers and the internet have changed everything. There is no way of fooling even some of the people all of the time. With any luck, and I won't quote Churchill here because he was as much part of the problem as anyone, but we are full speed ahead into the end of the beginning.
Posted by Claire McDougall at 10:58 AM No comments:

The Ties That Bind Us

As Neil Tyson astutely observed, we spend the first two years of a child's life teaching it how to walk and talk and the rest of its life telling it to shut up and sit down. That's the culture I grew up in, the one that most of us call home. We have come to think of the small inner voice of doubt we harbour as just something inherently human, and something we have to live with. Surveys have shown that most people think of public speaking as (literally) a fate worse than death. Because if you have been put in your place in the chair as a child, you're not going to be able to stand up and speak so easily.  You're not going to be able to think of yourself as worthy of attention. Children, especially babies in our culture, are thought of as being in a constant grab for attention. Babies are left to cry because they are "just trying to get attention." 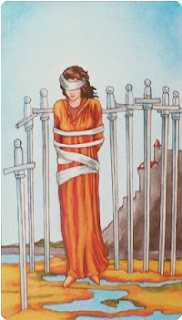 We may have published a book, we may have become the highest-grossing star in Hollywood, we may be president of a super power, and no matter how much hot air we blow out in the cause of our self-worth, we are still in our own mind's eye, bound up, tied to a chair. This is especially true of women. In the above picture, the castle that is rightfully ours lies off in the distance, blocked from our vision by a puny fence of our own making. 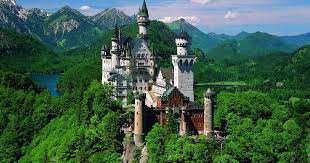 To escape, the first step is to acknowledge that the ties that bind us are not chains, but only ribbons, something we could actually wriggle free of. The fence we have constructed around ourselves, or has been constructed for us, is made up of our own courage turned in against itself. It's a barrier made up of swords barely planted in the ground.  Like all fear, it exists in our own circle of solitude and won't withstand the action of simply standing up and walking away. So grab your sword, your own courage,  and make a run for it!
Posted by Claire McDougall at 2:25 PM No comments:

When I walk through my stable of dead heroes, feeding to them their allotment of ghost hay, what strikes me is how fleeting is the whole farm and stable thing, those plowed fields of names and numbers, our own personal historical landscape. We preserve it because some of these phantoms have laid their stamp on yonder hill, on this hollow and dip,  on that line of trees punctuated across the horizon. Most of us are chaff and get tilled back in, and it is this prospect of anonymity that keeps us moving through our stables of the dead. 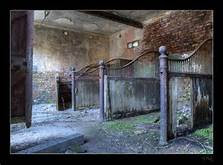 I suppose different stalls in that stable have different functions: there's the one of dead ancestors and family, the ones that have to stay with us because they were too known, too much a part of the measure of ourselves. We go into that stall and pull out the ossuaries, the clean white bones of the dead father, those other bones that go back further and are almost turned to stone by now: the great-grandmother after whom you were named, the great-grandfather who took a bullet in the neck at Flanders.
But the place I spend the most time is in the stall of those people we never knew but whose lines of thought and speech still make the world for us a warmer place. These bones came to us like collectors pieces, across the counter of ideology; we have taken them out often and polished them. Some we don't even look at anymore, because they belong back in the days of being young and easy. But we still like to know they are still there. 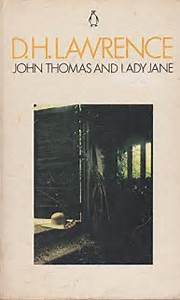 This is where we come in the lonely hours of night with our swinging lanterns. As we grow older, the hay in this stable doesn't smell so fresh anymore, but if we stay very still, we can still make out the faint aroma of movement, of horses flashing into the dark, of the turning pages of our numberless dreams.

Posted by Claire McDougall at 1:11 PM No comments: