I must have caught something in the air when I was composing my last blog entry about Native America, because unbeknownst to me the first local Pow Wow was being planned in Aspen for the following weekend.  This is the photograph that appeared the  day after the event on the front page of our local newspaper, and it is so telling, I just want to hover for a moment longer on this topic of America and its first peoples. 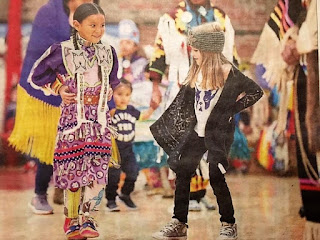 I have been to Pow Wows before, and I sit there watching in my all-whiteness, trying to be less conspicuous, but most of all nursing a great pain. I'm not entirely sure where this comes from, though my brain tells me it has to do with the great injustices perpetrated against these peoples. I come from a country that has also suffered under colonial rule, so, I reason, this pain must have to do with a feeling of empathy.

But I sense it is something more.

Hollywood has provided some visuals here of native Americans and Native dress. At this Pow Wow, too, there was an older man in full regalia: head dress, fringed leg wraps, chest plate of threaded bone. And to some extent we have been shown the audio that goes along with it, the kind of screech/singing and drum beating heard from that band of savages over in the hollow. 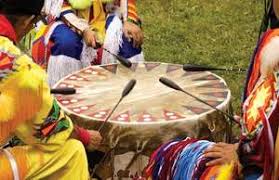 But to witness it is something else: men and women around a large vellum drum, some creating a small rhythmic background while another crashes down with a strident booming beat. And all the time, the high screeching singing that reminded me this time of the cry of coyotes.
This is where my  pain comes in, I think, from this primal cry. These days of course it incorporates all the devastation that that culture has met with in the last few hundred years.  But I suspect the sound was always the same - it's something that is birthed in the face of a rising moon, of the cycle of the seasons, of the sheer act of survival. It is something we have lost, this connection point of ourselves to raw, unadorned being.  Our religion has separated us from it until we recognise only the safe and sanctified icons, like the one that burned in Paris this week.
But it's in us, albeit a pale shadow. And it hurts when we watch the Indians in their dance and in their song. This primal urge wants us to know it has not been silenced. It is still there.
Posted by Claire McDougall at 9:11 AM No comments:

Native Peoples And The Right To The Moral High Ground

Every year the Ute Indians travel to Aspen, formerly known as Ute City, from their place of exile, a reservation in Utah, to perform dances for tourists in Aspen's Gondola Plaza. It would please me no end if what they were actually doing in their native language is placing a curse on these white invaders, but that spirit of revenge is not their modus operandi. The Utes say they are here to offer a blessing, and I believe them. 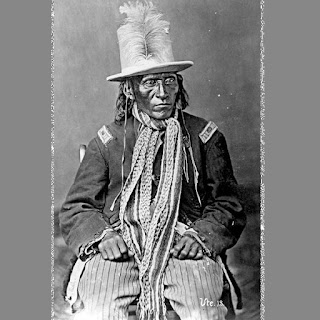 As with all native peoples in America, Ute history is peppered with broken treaties, land-grabs, relocations and outright massacres. If you google The Utes, you first have to plough through entry after entry from the government approved sites, most of which are put out by the local Indian museums, a decoy to make the invaders feel better about themselves.  I've been to the Ute museum run by little old white ladies, displaying affadavits from natives who want you to know that being wrenched from their families as children and forced into government boarding schools to be guided in the ways of the west was the best thing that could have happened to them.
To this day, Native Americans  may not own land, are marginalised and regarded with scorn when they are regarded with anything at all. As I write, the Pine Ridge Reservation in South Dakota, one of the poorest, is under flood water while we opine instead about the elocution of a demented president.

The Europeans that invaded this country, known to the natives as Turtle Island, have a lot to answer for, but they set up institutions such as the Bureau of Indian Affairs to make sure they never have to.

That's why this is my favourite picture: During the Lakota/Sioux stand off at Standing Rock in 2016, veterans from the US army came before the Lakotah leadership to ask forgiveness for the centuries of oppression of native peoples. You know what, Chief Leonard Crow Dog granted forgiveness? 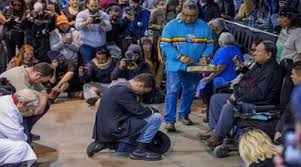 I have to admit that when I think of the Indian in his top hat and his desperate attempt to be accepted by those who did not have his best interest at heart, it pains me to see this generation of his people turning the other cheek. But wait a minute, isn't that what the icon of the religion of these invaders stood for? The great irony of course is that the native peoples always saw the world like that. The irony is that the white invaders with their crosses and moral law did nothing but try to undermine it.

Posted by Claire McDougall at 3:20 PM No comments: