In Diana Gabaldon's lengthy Outlander series, she fairly quickly takes her protagonists Claire and Jamie out of Scotland where the story began. Gabaldon's characters journey over to America, and I suspect that's because this is where she is from and presumably feels most at ease. I'm from Scotland, and so my stories stay there (out of about nine novels, there is only one section of one novel that doesn't take place in my native land.) It belongs to my psychological make-up and so by extension to my characters'. I had moved Maggie and Fergus up to the north east of Scotland at the end of the second book, but they asked to come back to Dunadd for the finale. So, how could I stop them? That is where I feel most at ease. 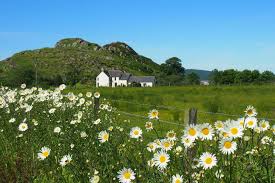 Right now my protagonists are in a boat on their way down to Glasgow (or as it was and is in the Gaelic, Glaschu) to a monastery to beg dispensation for a couple of characters that have fallen into the hands of adverseries down south in London (or as it was known then, Londonwic.) So it was off to that great research institute, Google, to find out about  eighth century sailing craft, just how much technology was available at the time to build these two-masted frames of alder covered with stitched hides and sealed with grease? 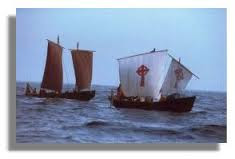 (Don't underestimate how far these primitive boats could travel- in the 1970's a sailing enthusiast decided to recreate one and sailed from Ireland to Newfoundland.)
Then, I have been delving into medieval Christianity and the kinds of things that were happening in monasteries at the time, most notable of all (apart from missionary expeditions) the crafting and writing of scripts. It wasn't so easy, as the paper was vellum - sheep, calf or pig skin stretched very thin and scoured, then coated with lime. So I have been away from my manuscript, storing up on facts and figures.
Readers like these kinds of details. People like to read and learn at the same time. They like to travel, just as long as they can stay at home while they are doing it.


Posted by Claire McDougall at 6:29 AM No comments:

There ought to be an award for British playwright Peter Shaffer for just being so damn profound: The Scriptor Profundus Literary Award. Shaffer asks grown-up questions like: What is the true nature of passion? And then we've all seen the movie Amadeus with Tom Hulce as Mozart - flashy and visually gorgeous, but listen carefully to what Shaffer is asking: what's the relationship between the artist and art?
We are a culture that needs its heroes.  We make them sometimes out of thin air (cf any Kardashian and in a similar vein Trump)  In the case of art, we want the vessel to equal the wine. But that is rarely the case, and the opposite is often true.
To take a trivial example: Bing Crosby, crooner and Hollywood good guy, was a monster at home: two of his sons referred to him as authoritarian and committed suicide; he courted Grace Kelly while his first wife was dying of cancer; he threatened to kick his daughter out if she had pre-marital sex. But the impulse is to believe in the myth, to just keep singing White Christmas.
Salieri in Amadeus has a similar problem with Mozart: How could God plant such divine music in the heart of a buffoon?

Closer to home, I just found out that Laurie Lee, writer of Cider With Rosie, the kind of book that I want to curl into and re-read until I drop out of its pages by force of gravity, was abusive on the home front, too. His daughter recently recounted how she had to go into psychotherapy over his controlling parenting. Cider with Rosie used to be put into the hands of all teenagers in the British school system as an example of sheer beautiful descriptive writing. And it's all about his memories of home: his knuckle-headed mother, their topsy turvy house and the seasons of the lucious Cotswold countryside he grew up in.
There's my hero Steinbeck, too. Fascinated as I am by his life - Monterey and all that - I have to admit that the man should never have had children.
So, because Shaffer just won the profound man of the year contest, let's remind ourselves of his conclusion in Amadeus: you shouldn't confuse the wine with the vessel. 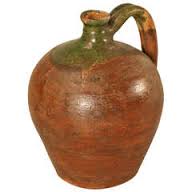 Appreciate the art for what it is - a gift from the gods. Truth is, the gods don't seem to care that much about the nature of the vessel they dispense their elixir into. Just be glad they see fit from time to time to pour a little into each of our all-too-human cups.

Posted by Claire McDougall at 7:15 AM No comments:

Me, Myself and the Lampost

I was on the phone with my agent this week. Agents are busy people, something that we earthlings mired in our own worlds don't always appreciate. He had just got back from the Frankfurt Book Fair, and he talked to me in between a conference call with Australia and another with England. He has over twenty clients and manages the literary estate of Louisa May Alcott, so my fifteen minutes were precious and we got a lot done: I was anxious to talk to him about some Scottish publishers I had discovered, because he has been reading (on his way to Frankfurt) my latest book (nothing to do with the Veil Of Time series - no time travel, no ancient past, just Scotland as usual); he thinks it's ready to go out into the world, and so he will put together a list of prospective publishers. We both agree that Scotland is really where my writing belongs. I am excited because that is also where I belong, and perhaps this will get me back there. 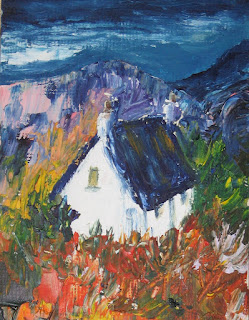 Blades of frozen grass poke out of the five inches of snow that have fallen during the  frigid night. Colorado is about to enter its Narnia phase, an analogy I fall back on every year at this time, though it doesn't run very far. No Snow Queen - unless it's me. No lion - unless I am it. No innocence of children - unless that is my role, too. The sages say we create our own reality. We are the movie we choose to watch as well as the screen and the projector. 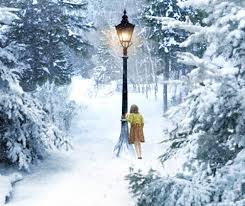 In Narnia terms, we are also the lamp post, the light and hope that already live within us. Outside my  study window a sparrow picks at an apple still clinging to the frozen tree. The thermometer says it is only eight degrees Fahrenheit. The little bird's cocktail-stick legs must be numb. She endures the cold and the frozen apple because that's what's on offer this morning. No questions asked. As far as I can tell, that's the only way forward -- step into the wardrobe and then step out on the other side. Somewhere out there in the snow shines a lamp post, so just keep moving towards the light.

Posted by Claire McDougall at 7:11 AM 2 comments:

Veil of the Pagan

Last Saturday on halloween,  TV evangelist Pat Robertson rolled out his annual warning that this festival, despite all appearances, is actually a ruse of satan. The holiday has to belong to satan, the thinking goes, because it's pagan. Good God, what was the point in burning all those hundreds of thousands of witches if these pagan rites were to continue? Put away your costumes, lock your doors; chain up your daughters!
Pat Robertson would also think Native American holy days are satanic. Or anything else not instigated by to the church fathers. In fact nothing but boys' choirs, kneeling sinners and flesh-eating supplicants are permitted.
But the root of this evangelical thinking is sheer intolerance.  Of course, say the evangelicals - we worship a jealous god. Somehow they have circumvented the teaching of the Christ they profess to venerate, that mountain, lake and field preacher who taught love and tolerance above all else. They have cherry picked the scriptures that foster paranoia and ignored the gospel that is "good news." 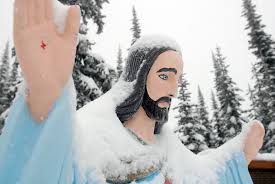 Truth is that any monument to Christianity you can name, down to Westminster Abbey, and including the sacred Isle of Iona, was built on a pagan site. In Scotland the church is called The Kirk (from circle) because churches were inevitably built on scared pagan circles. The yew trees that often line Christian garveyards are the actual trees left over from the pagans who venerated the yew as a symbol of eternity. If you think the early Christians were putting up Christmas trees in Judea and bringing in mistletoe and greenery to decorate their houses, or rolling eggs down the hill at Easter, think again. These are some of the completely benign pagan customs that survived the Christian onslaught.
Candlemas was a feeble attempt to co-opt the pagan celebration of Imbolc which marks the beginning of spring. Christmas, Hannukah, all hark back to pagan celebrations of the winter solstice. Such sin! 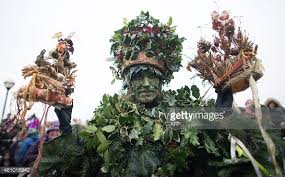 So, Halloween. All Hallows Eve. All saints. No, it's the end of the Celtic Year, Samhain. A time when the thin veil between what we know and what we only think we know grows thin (a fitting meditation for evangelicals of all stripes.) It celebrates the grey area between life and death. It is in Spanish pagan terms the day of the dead. Dias de los Muertos. Pagan. And it's fine. Get thee behind us, Pat Robertson.
Posted by Claire McDougall at 8:07 AM No comments: