Since I have been going on at length about the machinations of the writing life, I thought I'd share a picture of the place where it all goes down. This is my study, a nice study, I have to admit, but just remember that before this space was added on to my house, I wrote several novels in the broom cupboard under the stairs. So I deserve it. I even fengshui-ed it. 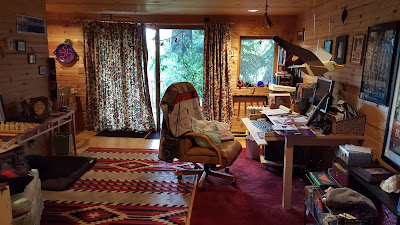 So, let me describe it. In the foreground (top right), if you look carefully, hangs a wooden seagull. I'm always off in my mind to the country of my childhood, where this sea bird's cry is simply the background against which everything else takes place.
Out of view behind the chair is a big-breasted statue of the Buddha's mother. What looks like a boom mic hanging from the ceiling over my desk is a bundle of lucky feathers and other amulets, because I am extremely superstitious. It's worked so far! All along the right-hand wall are pictures, of family and a signed poster of Braveheart. Next to Mel is a picture of John Steinbeck with his dog Charlie. Heroes all. 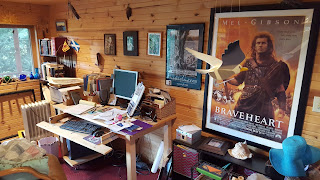 There's an alcove on the far left with a writing desk, though I rarely sit there and it's mostly a place to put things that don't belong anywhere else.
Moving further up the left wall, there's a table on which sits a replica of the 12th C Lewis Chessmen, and a couple of browned photographs of my great grandmother Rebecca (aptly named Brown) and her husband in WW1 uniform.
So that's my creative space mapped out in 3D. I only have to step into it to feel different. It's my version of Mozart's billiard table  (at least as it was portrayed in Amadeus.) This is my Holy of Holies.
Posted by Claire McDougall at 7:18 AM No comments:

The Slightly Dark LIfe of a Writer

I am always waxing lyrical on this blog about heavy stuff, mostly because that's what keeps me up at night: Scotland, the state of the universe, the state of book publishing and where I fit into that. So I thought this week I'd lighten up (I'm a writer, so I have to be reminded to do this - especially when someone asks me how I am doing, and I take that for a real question.)
There's a lot of mythology surrounding the life of a writer. A lot of it has to do with whisky, which is just so much posturing, if you ask me. You can't write good literature if sozzled. You just can't. A lot of it has to do with living up to that reaction you get when you tell someone you have a published book. 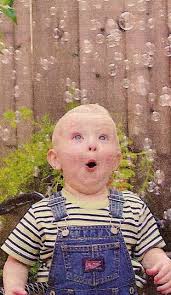 But it's all bubbles.
Here's the reality of being a writer. The first thing is bums on chairs: every day, same time, and it isn't always going to look like you're actually doing anything. Ask my husband. Writing is sort of like the universe: only 5% of it is stuff and the rest is either dark energy or dark  matter.
The next thing is that you are incredibly difficult to live with. Ask my husband. If you're engaged in writing something long like a novel, you can't really discuss it, for fear it sends the muse scurrying off. But the pressure of holding all this in looks something like my pressure cooker when I get distracted, as I often do (because I am a writer), and forget to turn the heat down. 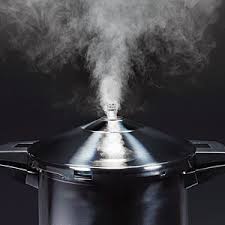 Not writing may be even worse: you're like a bicyclist in the  Tour De France that someone has accidentally locked in the toilet. 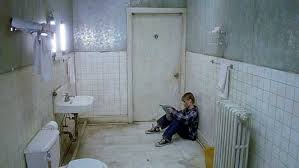 Well, that's about as light as I get. Just be glad you're not married to me.

Ghost in the machine.

Almost as many Russians read this blog as do English-speaking readers. Russians love our bard Robert Burns and have some kind of a fascination for Scotland and its literary output. In fact. no matter how spurious their system of government, that country has never suffered from a lack of enthusiasm when it comes to the arts: it has often been pointed out that although you have to knock westerners over the head and abduct them to poetry readings, Russians will queue around the block.

Could you imagine that in this country? If you see a queue around the block in the West, it is either for the latest toy or the latest blockbuster movie. Sometimes, people will queue for books, but only if it is a bestseller. The publishing industry's wet-dream.
Western society, lacking almost anything else to gravitate towards lists towards the blockbuster and the bestseller.  It has entirely lost sight of the reality that literature should say something beneath the story. I read Goldfinch. Bestseller. Pretty good (if a little unbelievable - says she who writes about time travel!) but not much there beyond the action. It's like the first wash became the painting. America in particular is drawn to this kind of cult - look at Donald Trump polling at 25%. Is there anything there beyond money and hot air?
Not that I move in Hollywood circles, but I hear that everyone you meet in LA is sort of in a blockbuster trance. Ironically, someone like Amy Shummer who finally comes along and bucks the system, questions the role of women in the movie making machinery,  becomes a starlet of the cult herself. Her photo-shopped pictures start appearing on-line and in magazines.
The publishing industry, too, has been taken over by commercial enterprise and sits in wait for the next big thing. It has been asked many times, but it's worth doing so again: which of the late and great writers would be published today? Grapes Of Wrath? Not a chance. Any of DH Lawrence or James Joyce (Ulysees? Give me a break.) Ernest Hemmingway suffered from and played to cult status, but even he wouldn't be put into print in the current climate.
Since Amazon got into the publishing business, it has its own best seller list. The banner of bestseller has been flown until the whole notion has become frayed and faded, nothing more than a ghost. 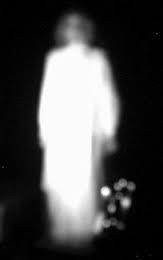 Anyway, if I weren't sitting in literary limbo myself, I might not be beating this drum. I actually prefer the company of ghosts. But these are sinister ghosts, not good ones. They mess with your mind and rob the soul. Our collective soul. And soul is something here in the West we have so little of.

Posted by Claire McDougall at 9:50 AM No comments:

Finding Yourself at the Scottish Games

I was dressed up in a tartan frock handing out my business cards and postcards for my book at the Colorado Scottish Games, feeling a little silly, gasping for a cup of tea. Although it is true that Americans of Scottish descent are willing to toss the caber and dance a Highland fling, they mostly shuffle away from haggis and don't ever gasp for a cuppa. At Highland Games in Scotland there is always a tea tent with empire biscuits (woops - just realised the significance of that little piece of confection!) and scones and  millionaire shortbread. And a team of older ladies sporting pinnies and perms who natter between themselves as they pour endless cups of tea, and none of your foofy flavours either, just plain tea like you get in Scotland and don't have to be asked what kind. Tea. Tetleys. PG Tips. Co-op. At these games there was not a cup of tea in sight. 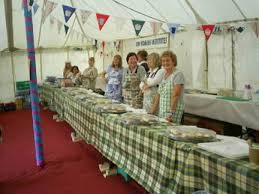 But men in kilts there were aplenty, clan tents, even a McDougall tent. It's all authentic Scottish filtered down through America. It's highland dancers with big smiles, and bagpipers chewing gum. It's hot sweaty weather instead of drizzle. I won't say it's all a bit Disney. I happen to enjoy Disney, and I enjoy American Scottish games, too. I was just walking around in my tartan, not a thing I would do in Scotland, wondering what it was all about? 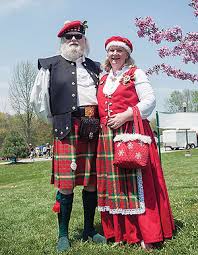 Well, you don't have to think too long. It's all about identity, silly. Everyone hankers after it, including myself. From one end of the earth to the other, everyone feels the need to belong. We're a clannish species and work better in small groups. If you share a little DNA, it helps. If you wear the same tartan, you're half-way there. And if you drink tea by the gallon and relish a plate of haggis, neeps and tatties, you can be sure where you really belong.
Posted by Claire McDougall at 7:20 AM No comments: